Things to consider before buying a refurbished phone.
By Joseph McCabe, PE 10/25/2015 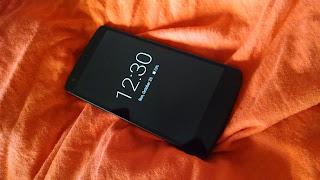 For me, getting a new phone is very frustrating because all the trends in mobile computing need to be evaluated. Should I get a watch and use that as a phone? Can I get a wifi puck and just use a tablet as a phone with a Bluetooth headphone? And there are dozens more questions that need to all fit within a budget for a phone plan's data usage. When my 2013 Moto X phone screen broke, I had to start this process of choosing a replacement phone with the additional investigate of a screen replacement. Screen replacement would have cost as much as a new phone, so I added Gorilla Glass to my requirements of a new phone.

My motivations for buying a refurbished phone are that I didn't need the new features of today's Nexus phones.

Things I don't need:
What I wanted is to use is all my existing periphery equipment:
The capabilities I wanted, because I had the peripherals, are missing from the new Nexus phones. So the older original Nexus 5 is one phone that floated to the top of the list when investigating all the replacement options. Nexus 5 has these additional features: Multi-touch capacitive touch screen, Proximity sensor, Gyroscope, Compass, Barometer, Accelerometer, Hall effect sensor, Ambient Light sensor, GPS (GLONASS &Beidou), step counter and detector.

The 2015 Moto G was a close second choice in my investigation. That was until T-Mobile dropped the price on their refurbished Nexus 5 to $149. And they spread that out over 24 month payments without any interest charge (I didn't need this financing, but it gave a relationship to my provider that the phone continue working). A 20 day return policy and a 90 day warranty gave me the confidence that the phone would be working as much as I needed. I did have to pay tax and shipping which was unfortunate.

Of course, like you I was concerned about the condition of the phone. I was pleasantly surprised at how good the condition was when it arrived four days after ordering. There were strips of protective plastic all around the edges, plastic protecting the rear camera and the face of the phone itself. The only indication that it may have been used previously was a small amount of scratches on the back side (see youtube video at the end of this blog).

I tested everything when the Nexus 5 arrived using the app "Phone Tester" from the Play Store. Android system upgraded multiple times, from 4.4, to 5.0 to 5.1 to 5.1.1 and to my surprise then it loaded marshmallow 6.0. I hadn't put the T-mobile sim into the phone yet so this was all done over the air (OTA) using wifi. Apps were constantly automatically updating at each new OS, but I stopped the automatic update in the Play Store. After setting the phone up the way I wanted I called t-mobile and gave them the 9 digit number the sim card they had provided at no charge. My old phone no longer used the phone number but the new Nexus 5 did. I wanted to make sure nothing was wrong with this new phone, especially the USB charging socket. Turned out that this socket was in excellent condition. My old phone is now working as a WiFi only device still able to receive and make phone calls over WiFi calling.

I often like to use the java script on Octane to see how strong my web-based computing is compared across devices. I've done this on Raspberry Pi 2, the Moto X phone, desktop and mini computers and now the Nexus 5. The score for the Nexus 5 was 50% higher than the Moto X phone I replaced. This is good.

Only issue I have found with the phone is the music amplifier through the headphone jack sometimes gets garbled. I know the headphone plug is the right size, but I think it isn't making a great connection. Not a big enough problem to send the phone back at this time.

Using the T-Mobile refurbished program has been quite a respectable experience (see update below for clarifiation). I will update this blog if any issues arise. Hope this helps!
I've put this boring 2 minute long, no dialog YouTube un-boxing video so you see what is sent when getting the Nexus 5 refurbished phone from T-Mobile. Lots of useless packaging (New2U), the phone, a USB micro charger and a sim tool to remove and insert the tray for the sim card.

Hope this has helped in considering a refurbished phone for your next purchase.

2 week UPDATE: Update here, T-Mobile put an extra $10/month charge on a program of their's called Jump!. Be very careful that you don't get this added. It took a trip to a store and a call to 611 to fix this, if it isn't fix I will update this blog post. Hope this continues to help!
Posted by renewableenergyspace at 11:13 AM 1 comment: 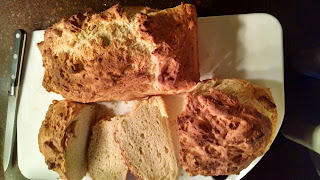 I have found it difficult and expensive to use yeast making gluten free bread. This recipe actually came out of my making bread with old dead yeast by mistake, and having used too much baking powder. The bread actually turned out great. I've modified the original approach after some more experiments. Hope you like it.

Preheat oven to 375 degrees F, put two bread pans into oven to heat. When you take pans out to fill you coat pans with oil or butter. I use Pam.

Ingredients:
Optional:
In a medium bowl, stir together the flour, xanthan gum, baking powder, salt, and the 4 tablespoons sugar.

In the bowl of a stand mixer fitted with a paddle attachment and splash guard mix the eggs, milk, olive oil, and optional vinegar.  Beat for a few seconds to combine.  Slowly add the flour mixture.  Beat on medium speed for 3 minutes. Separate the mixture into two parts for two loaves; place into preheated and oiled loaves pans. Cook for 22 to 30 minutes. Turn if the top is looking unevenly cooked.  Makes two-1 pound loafs.

Posted by renewableenergyspace at 8:49 AM No comments: