Purchased a Jetson Nano when it first came out (5/22/2019) to try and understand its unique place in the Single Board Computer (SBC) space. This video from Explaining Computers can help understand the specifications and this video the artificial intelligence use case.

I found after a few months that the bare bones computer had been accessorized, so thought that should be written about. At the same time, Raspberry 4's came out, with a much lower price point than the Jetson Nano, but different use cases. So here is an attempt to show how them compare and contrast, possibly from a different perspective than most others.

To eliminate any suspense, here is a photo of my current accessorized Jetson Nano: 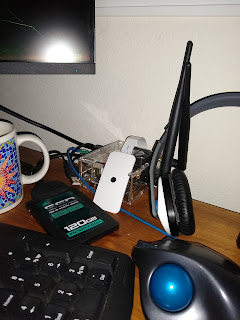 Which includes:
Been using the Jetson Nano as a desktop for a few months now.

And here is a photo of a Raspberry Pi 4 with 4 GB of RAM. 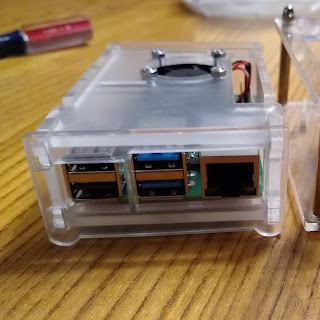 Same monitor (HDMI), camera, keyboard and mouse is connected to this SBC. A Raspberry Pi 4 comes with audio, WiFi and Bluetooth, so those costs at about $30 aren't required with the new Raspberry Pi 4. Lets call it $62 to accessorize the Nano, not including the monitor, keyboard and mouse. Accessorizing the Raspberry Pi 4 (RPi4) also has small costs, especially if interested in speeding it up with a SSD. Inside the plastic housing the actual hardware is quite small. This can be folded into a case quite easily. Both the Nano and RPi4 can be configured to run off the USB 3 SSD. 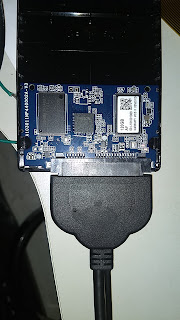 Raspberry Pi 4 is small, lighter than the Nano developer kit, has audio (headphones output and microphone input). Both need a power-supply; the Jetson can use a standard USB micro 5 watt which you may have laying around. The Raspberry Pi 4 is now using the USB C, about the same price. Both need a Micro SD card.

I haven't tried the Jetson Nano with a high wattage power option yet, but comparing the two boards with an older performance benchmark called Octane they both have about the same score. I'm assuming with a larger power supply the Jetson Nano would have much higher benchmark score.

The differences between these two systems primarily comes down to graphical capabilities. The Jetson Nano has both an HDMI and a DisplayPort connection. The RPi4 two HDMI micros. But the real power of the Nano SBC comes from its ability to do image analysis. It will do artificial intelligence of recognition services very powerfully. The real heart of the Jetson Nano is the little card, called the NVIDIA Jetson Nano module. The bulk of what you buy when you get the developer kit is the carrier board. The carrier board is the piece with all the connections. The module is what does all the work. So you can program the module to go out in the world and do lots of work, mostly image analysis applications. I assume audio analysis will be next, but the NVIDIA world obviously didn't concentrate on this use case for the Nano because of the lack of on board audio interfaces.

I've seen lowered prices on the Nano at Newegg this holiday, and lowered in store priced RPi4 at Microcenter.


Posted by renewableenergyspace at 12:39 PM No comments: