I was a digital audio taper of live music performances for about 10 years, 1995 to 2005. A songcatcher (read Mickey Hart’s book of that title). Instead of attending Jerry Garcia’s funeral I purchased my first DAT deck and started digitally copying live shows as well as recording live performances. Archive.org has eliminated the need for that taper trading community, it was fun while it lasted. I retired my large DAT deck at the soundboard in Winters California at the Palms Playhouse where it probably caught some more good recordings from 2006 to 2010, or maybe longer. Still have a portable Sony DAT deck.

This past February I was invited to present at the Grateful Dead Scholars Conference held in Albuquerque. Good to meet all the people continuing the culture, but I was a little out of my element surrounded by academics. My presentation was on the collective consciousness of the audience and musicians. Most deadheads will understand this concept quite quickly.  IF at all interested please don't hesitate to request a copy of my academic presentation.

I am writing this blog because of a project I have been working on for sometime. It waxes and wanes but at the heart is a continuous stream of Grateful Dead music for any location. Technology is enabling the low cost, high quality sound to be amplified and presented in a solar powered package. Here are some of the components:

I have been experimenting with many different audio scenarios and think I am on the verge of one that makes sense. It is a DAC HAT that has an amplifier on top of a Raspberry Pi (Zero, Pi2 or Pi3) running a Linux OS and music serving software that is accessed by a cell phone like Moode Audio. The gizmo isn't as important as the vision. My vision is for Golden Gate State Park, or any park, to have tree mounted speaker systems that can play a show. Alternatively, Bluetooth output could be multicast to anyone with headphones who then could listen into the show simultaneously with others in the area.


I wanted to host an example of an audio box that plays grateful dead concerts. They played some 2,500 shows, most of which are available online at archive.org. Many of these shows are now streaming high quality versions of the taped shows. In particular, a new form of show is emerging that has mixed audience sounds, soundboard recordings plus taper versions of the shows. These matrix recordings can be an amazing blend of the best aspects of the shows. The hardware/software solutions will lend themselves to any other band hosted at archive.org, etree.org, or an internet radio station. Anything streaming can be now amplified in high quality for low cost.

The current state of development for this concept is below. A 20 watt PV panel, charging a 7 amp hour sealed lead acid battery with a pulse width modulation charge controller. This solar and battery powers the Rpi and DAC HAT with the amplifier to power the sony speakers. The speakers are not weatherproof, so this can not be pole mounted yet. The concept is coming along nicely. 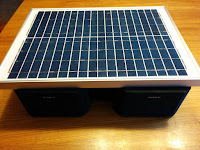 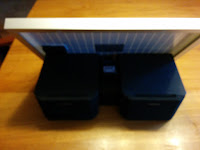 On May 8th 2017 I was able to set up the music at Red Rocks stage and play the 40 year old, remastered version of May 8th 1977. Red Rocks is open to the public as long as there are no performances.


I also set up the system near Folsom Field before a Dead and Company show 2017. The music seemed to be a draw for people to congregate around the 40 year old live performance, again May 8th 1977 Cornell Universty Barton Hall Grateful Dead show. Here is a fun publiclly available matrix recording on archive.org https://archive.org/details/gd1977-05-08.111493.mtx.seamons.sbeok.flac16 . The one I was playing is from Rhino, http://www.rhino.com/product/cornell-5877.

Stay tuned to this space as the audio solutions become packaged and tested for the playing of music in the parks.


The evaluation has been broken out into the following audio sections:

If you have read to this point, check back for updates on solar and actual park experiences. Don't hesitate to contact me if you want to join in the band, energyideas gmail.
Posted by renewableenergyspace at 8:00 PM

Thanks for any comments you may have.